Latest News
Everything thats going on at Enfold is collected here

Hey there! We are Enfold and we make really beautiful and amazing stuff.
This can be used to describe what you do, how you do it, & who you do it for.

Dan Liris took employees and their children with special needs to the Asian Para Games 2018 in order to provide them with the opportunity to see positive role models of people who have disabilities.

The event was attended by 35 employees of Dan Liris and their families as well as President Director Michelle Tjokrosaputro and her family as well.

PT. Efrata Retailindo – subsidiary of PT. Dan Liris – has received the Upakarti Award from the Ministry of Industry in the Pioneering category, for companies that have empowered SMEs. The award was given 10th December 2020 by the Vice President Bp. Ma’ruf Amin.

Dan Liris has provides a variety of training programs in sewing and knitting skills focused solely on women to provide them with empowering professional opportunities.

Some of the most recent training programs have take place in Semanggi, Tlingsing, Cawas, Klaten and Boyolali in Central Java. During these training programs women learn how to operate professional sewing and knitting equipment under the expertise of Dan Liris’ experienced training staff. The training spans the safe use of the machine as well as garment production techniques that the participants can then use for creating home industry ventures as well as applying for jobs at Dan Liris or other textile manufacturers.

The Garment Division of Dan Liris has carried out a number of CSR activities over Q3 2020.

Beginning with the Preparation Unit in July 2020, CSR was carried out in the form of providing sanitation facilities and toilets for Mrs. Mudiyem, a Preparation Unit employee who lives in Pajang, Surakarta. 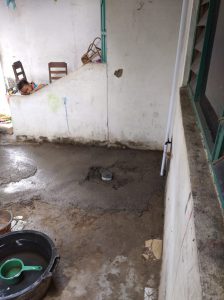 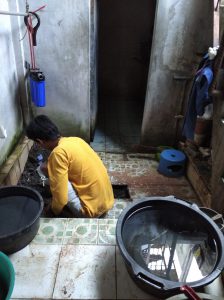 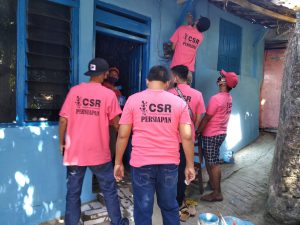 This was followed by CSR activities undertaken by Sewing Units 1A and 1B, by providing working capital assistance in the form of livestock, specifically goats, for Mrs. Sri Handayani, one of the Sewing 1A and 1B employees, in August 2020, in the Sawit area, Boyolali. 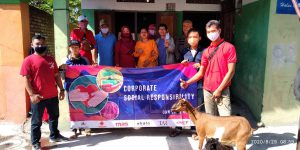 The next CSR activity within the Garment Division was undertaken by Sewing Units 2A, 2B and 2C, in the form of house and bathroom renovations. This took place in Juwiring, Klaten, in September 2020 for Mrs. Sri Wahyuni, an employee of Sewing Unit 2A, 2B and 2C. 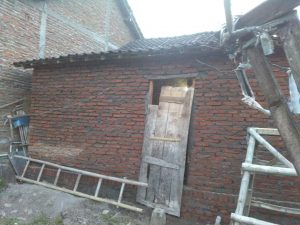 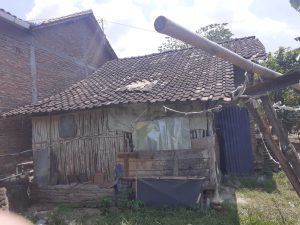 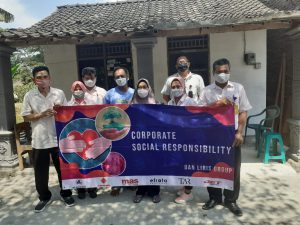 This series of CSR activities by the Garment Division was capped off with the provision of working capital assistance by the Finishing / Packing Unit which was offered in the form of goats in October 2020, in the Sawit area, Boyolali for Mrs. Sri Mulyani, an employee of the Finishing/Packing Unit. 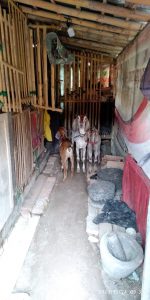 All of these CSR activities are aimed at helping to improve the standard of living to the benefit of our staff and their families.

Indonesia celebrates 2nd October as National Batik Day, in commemoration of the day when UNESCO recognised batik as Indonesia’s contribution to the world of cultural heritage. Now Indonesians have repositioned batik as a national icon and pride, with the international community also appreciating the fabric and batik as an artform. The art of batik is highly diverse and continues to evolve organically to reflect modern day techniques and fashion trends. Within this evolution, how will batik develop next?

A traditional fabric made through the wax-resist method with deep meaning associated with each individual pattern; batik dates back to the era of Indonesia’s ancient kingdoms. The fabric originates from Java; with influences from Chinese, Arabian, and even European acculturations; now other regions in Indonesia have produced their own batik motifs, which are considered on par with the original Javanese patterns. Nevertheless, with the tide of western influence after Indonesia’s independence, the centuries old traditional fabric fell out of favour with the younger generation. Batik stayed kept in drawers, only to be worn at formal occasions.

The 2nd October 2009 saw UNESCO including batik as Indonesia’s contribution into the Representative List of the Intangible Cultural Heritage (ICH) for Humanity. Since then, the Indonesian people have reclaimed batik as a national icon and a core part of the Indonesian identity. In addition to government officials, civil servants, and employees of state owned enterprises, employees of private corporations are also encouraged to wear batik at work.

Batik on the International Stage

On the international scene, batik has already taken its place in the contemporary fashion industry. Now the fabric is not only used for traditional clothing, but has also found its way to applications such as haute couture as well as being used in accessories such as handbags. Many popular figures have walked the red carpet proudly wearing batik, from Bill Gates, Nelson Mandela to Barack Obama, and from Beyoncé Knowles to Jessica Alba.

The international fashion scene has seen Indonesian designers introducing batik to the world through mixing the fabric with modern designs and production methods. For example, Iwan Tirta, famous for his batik shirt designs worn by the head of state at the APEC Summit in 1994; Ramli, who pioneered using batik on modern clothing including boleros, jackets, and suits; and Obin, who pioneered techniques in creating new fabrics to be batiked. The works of others such as Ghea Panggabean, Edward Hutabarat, Poppy Darsono, and many others have also supported batik on the international stage.

These advancements have also influenced internationally renowned designers from other countries to include batik in their design collections. Notably, the Belgian-American designer Diane von Furstenberg’s batik dress worn by the Duchess of Cambridge Kate Middleton; while Angelina Jolie was seen wearing a batik dress by US designer Nicole Miller. Other international designers who also featured batik in their collection include Belgium’s Dries van Noten, Thailand’s Ek Throngprassert, and Italy’s Milo Milavica. In addition, one of Italy’s oldest fashion schools, Koefia, has not only included batik fashion in its curriculum, but has also paraded its stylish designs on the catwalk.

The fabric is also being exported to many countries especially the USA, South Korea, Japan, Germany, United Kingdom, and the Netherlands. The first quarter of 2017 has seen Indonesian batik exportsreaching a total value of$39.4 million USD, with the USA being the largest export market making up 37% of the total value. Data from Statistics Indonesia also showed that since 2011, figures for exports, employment in the sector, number of business units, total production value, and materials value have all been on the rise.

UNESCO recognition and decades ofinternational appreciation have definitely increased the pride felt by Indonesians about batik which has led to the emergence of new and modern batik brands. In homeware and furnishings, the use of batik and ikat fabrics has also become more commonplace among high end brands.

Methods of batik application have also evolved; a new appreciation for handmade batik has given rise to new producers within this field for traditional motifs as well as the more modern and abstract batik tulis. The fabrics that batik patterns can be applied to has also moved on from silk and cotton to thicker fabrics such as wool and cashmere for winter collections. Luxurious embellishments such as metallic gold thread are also adding new dimensions to the possibilities of how batik can be customised and made into an individual fabric for use by apparel and homeware brands. 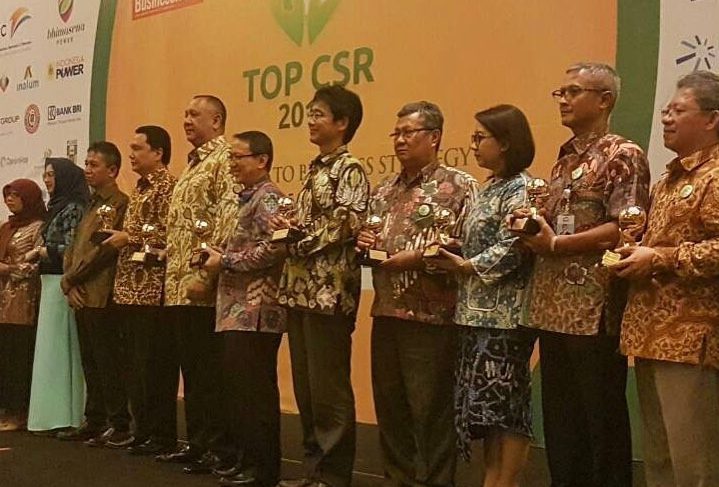 In 2017, Dan Liris successfully attained two awards recognising the company’s corporate social responsibility (CSR) programmes by Business News as well as the Indonesian Ministry of Health. With longstanding commitment to CSR and community development, Dan Liris is renowned in Central Java for carrying out effective programmes that bring about immense benefits to surrounding communities. As such, the company received the ‘Top CSR Improvement 2017’ award during the Top CSR Award event held in Jakarta on April 2017 by Business Week; the award utilises the ISO 26000: Guidance Standard on Social Responsibility certification as the basis of its awarding system. Moreover, Dan Liris received recognition from the Ministry of Health for the company’s participation in the ministry’s “Healthy and Productive Women Movement” event. Senior-level management members at Dan Liris accepted the award on behalf of the company.

Since its establishment, Dan Liris remains embedded in its mission of ensuring proper livelihoods and quality of life for its employees and local society. It is through this dedication that continuously motivates the company to work towards sustaining healthy financial performance so as to ensure consistency in the implementation of its CSR programmes. Dan Liris has also carried out wide-ranging CSR programmes for its employees that were executed by its Spinning 1, Spinning 2, and Spinning 3 units in early 2017. Among the measures include home renovations, building fully-functional cleaning facilities, and blood donation drives. Dan Liris’ latest awards, therefore, showcases the company’s effective CSR initiatives in pushing for concrete developments for the Central Java region.